Want to try the new features in v2.0 - just head over to our demo site: https://inveniordm.web.cern.ch/

If you want to install it, follow the installation instructions on https://inveniordm.docs.cern.ch/install/

InvenioRDM now supports versioning for records. By default, InvenioRDM does not allow you to change the files after you have published a record. With the new versioning support, you can the files can now be changed however in new versions of the record.

Now, a user can create a new version of the record, add or remove files and publish it by clicking the "New version" button.

One way to make new versions is from the record's landing page directly by clicking on the "New Version" button. Only allowed users can do so: 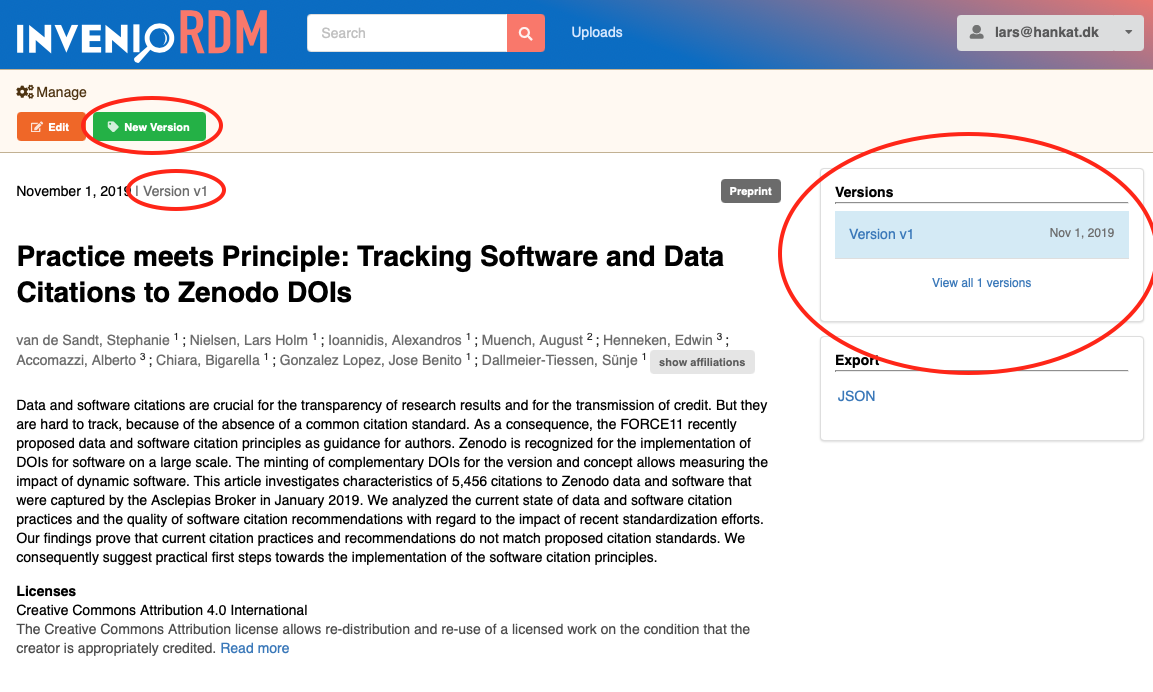 Another way is while editing a previously published record:

Search results will by default only display the latest published version of a record. However, toggling the flip switch in the versions facet, allows you to view and search all versions.

The landing page for previous versions of a record clearly displays that a newer version exists, with a link to it.

Also, in the right-hand column you have a link to view all published versions: 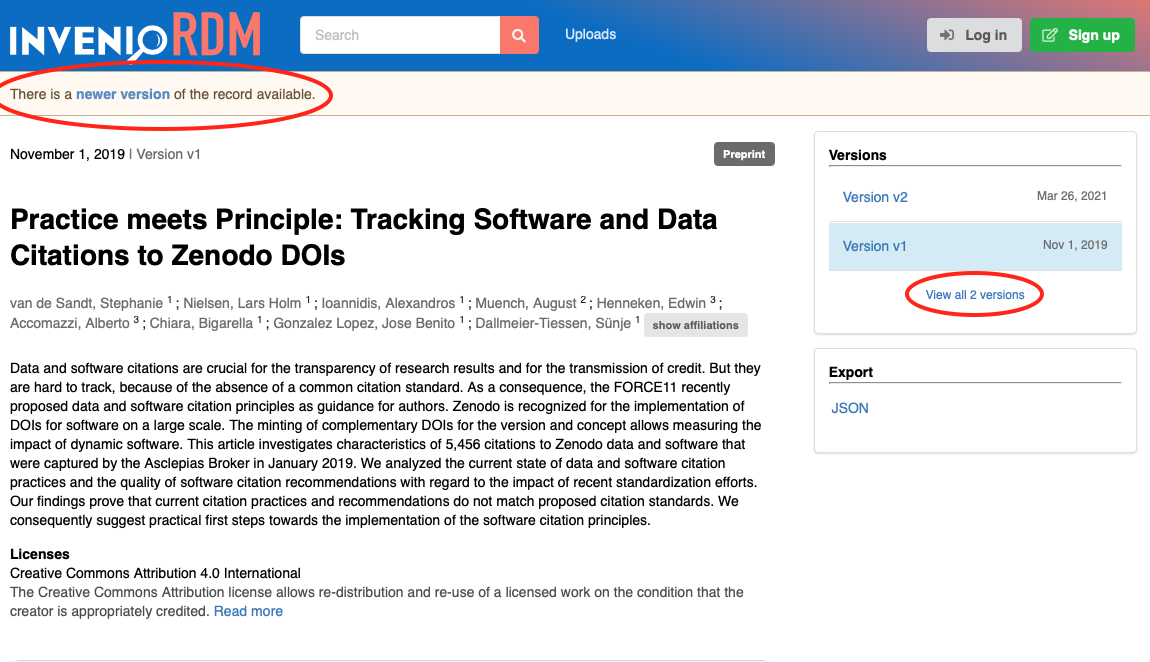 We manage permissions at two levels when it comes to versioning.

Ownership of records, secret links (see below) and sharing of records is applied to all versions. So for instance, if you create a secret link to edit a record, that link will allow the holder to edit all versions of that record.

During this month, we have also added the capability in the REST API to create a shareable link (similar to the Share or Get a link feature on platforms like Google Docs, Dropbox, ownCloud and the like). This link is interchangeably referred as an "access link", a "secret link" or a "shareable link".

You are able to create links with different permission, for instance to allow

In the future, we plan to also allow sharing only a preview of an unsubmitted record. This is particular useful for instance for peer-review scenarios, where a user can prepare a dataset and provide a journal with a link to the unpublished dataset. The peer-reviewer can then anonymously access the dataset, and the researcher can later update the dataset based on feedback from the peer-reviewer.

We plan to have a first minimal user interface for allowing users to use this new feature in the April release (v3.0). Below you see some of the mockups:

A secret link can be created by sending a POST request to the record's access/links endpoint, e.g.:

If everything went well, the (JSON) response should contain a token. To use the token, it has to be specified in the query string of a URL, e.g.:

This will grant the user the permission with which the secret link was created (even if they don't have an account).

Note: Optionally, an expiration date (UTC timestamp) can be specified when creating a new secret link:

The last major new feature is that you are now able to upgrade an InvenioRDM v1.0 instance to v2.0.

Do remember to make a backup of the database and files before performing the upgrade!

The JSON serializations for records in the REST API have only changed slightly this month, mainly for the new versioning support:

The following are all carry-overs from the previous release:

These are all carry-overs from the previous release:

For this particular release we're especially interested in hearing about your challenges and success about upgrading from v1.0 to v2.0.

Please post a message on the #rdm-general Discord channel.

For other issues, please first check if you've hit a known issue:

During the April iteration (deadline April 30th) we're moving most of the CERN teams on top of InvenioRDM. This means, we'll be around 12 senior and junior developers working on InvenioRDM.

This in itself, poses its own challenges in onboarding new team members and reaching high productivity fast.

We'll be running three teams, each with its own focus:

The development work in this release was done by: